skip to main | skip to sidebar

Meet My Sister, Carol, But I Call her Calo! 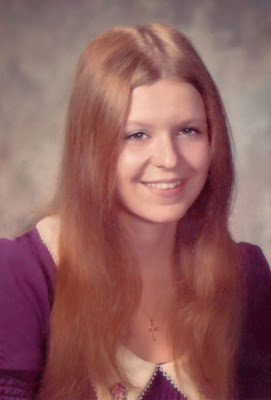 My younger sister, Linda Carol Johnson Mullaney!  But I call her Calo!  Carol and I were the only girls.  We have three brothers.  She is and has always been so talented as well as beautiful!  She started working at the Jackson County Hospital before she finished high school.  This sparked her love for the career she chose.  After graduation from Scottsboro High School in 1975, she enrolled  at Drake in Huntsville in the nursing department.  She continued to work while attending Drake. After receiving her nursing degree, she continued working at the Jackson County Hospital in Scottsboro where she worked for many years.  She was a vital part of the IV Therapy Dept. and was extremely good at what she did.  She had a genuine love of all her patients and always showed them the compassion that she would have wanted someone to show her own family.  Her patients were essentially an extension of family and she loved them all!  I personally have had many stays in many hospitals and a caring nurse like Carol was who I hoped entered my room to take care of me.  She has also held several executive positions in assisted living homes, which was another job she loved!  An interesting fact that many people may not know is that she is a terrific writer!  She penned several short stories while attending college at Northeast.  I still have one of the copies!  Her resume is much longer than this post!   We are all so proud of all her accomplishments!  She has two children, Nathan Hollis Smith who lives in Scottsboro with his wife Lindsey and their two children, Druw and Colin,  and Melissa Gillilan who lives in New Market with her husband Jeremy.   Carol now lives in New Market, Alabama with her husband, Thomas Mullaney.  This photo was a Scottsboro High School photo.  I will be adding recent photos soon!   Calo, Love You Big!  :)
http://www.MemoryPrintsPhotography.com
http://www.YouTube.com/dodotburgess
Posted by Deborah L. Johnson Burgess at 9:53 PM No comments:

The Old Coke Machine and the Unlit Cigar Scottsboro, AL 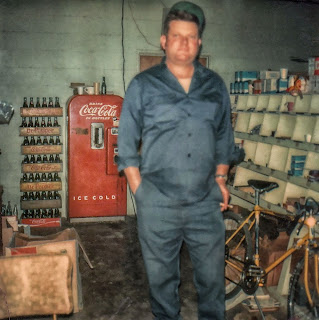 This is probably one of a very few photos that was taken on the inside of the old Johnson Plumbing and Electric Co., Scottsboro, Alabama,  that contains a shot of the old Coke machine that was one of the original "fixtures" of the history of the building.  If you take a closer look at the front of the machine you can see where the Coke Company had increased the price from 6¢ to 10¢.  The 6¢ price increase didn't last long because of confusion and expense of the extra 1¢ upgrade from a nickel!  I remember when the Coke representative changed out the coin mechanism when the price went up!  Right beside the machine is the typical “stack” of refills of the old returnable glass bottles.   This photo was taken after the first remodel of the building and the old wooden front was removed.  Originally the old Coke machine sat on the right hand side wall on the front entrance of the building.  The man in the photo, of course, is my Dad.  Again, if you will take a closer look at his left hand you will notice he is holding a cigar.  There is a great story behind the "unlit cigar".  My Dad smoked for years.  One day, as a dare, a friend told him that he needed to stop smoking.  The friend told him that he wouldn't be able to stop.  My Dad, W. H. "Shag" Johnson, Jr., had a lit cigarette in his hands when the "dare" was made.  He looked at his friend, took a last puff and threw the cigarette in the garbage.  That was the last cigarette that he ever smoked!  From that day forward he would light a cigar, put it out, and hold it like he is in the photo.  The only time he actually took a "puff" was to light the cigar.  As soon as it was lit, he put it out.  I guess this was his way of breaking free from cigarettes.  From time to time he would put the unlit cigar in his mouth, but that was usually right before he threw it in the trash.  People who knew him could tell when he was upset or unhappy by the way he would chew on the cigar before throwing it away!
http://www.MemoryPrintsPhotography.com
http://www.YouTube.com/dodotburgess
Posted by Deborah L. Johnson Burgess at 11:58 AM No comments:

Life and Work in Scottsboro, Alabama 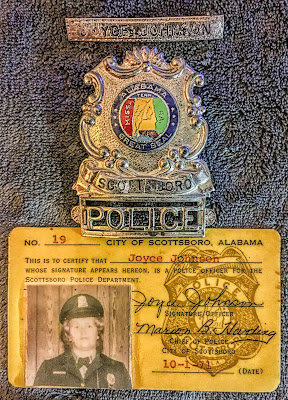 My Mother, Joyce Dean Johnson, held many different jobs in her lifetime. She was one of the original phone operators in Scottsboro (before rotary), a bookkeeper, a sales clerk at Elmore's 5 and 10 on the square in Scottsboro, manager and bookkeeper for Johnson Plumbing and Electrical, a sales clerk and part owner of D.J.’s Unclaimed Baggage, and an admission clerk at the Jackson County Hospital. She worked at the hospital for several years and trained many others to work in the admissions department. After several years she was promoted to patient’s accounts representative. I think of all the jobs she held in her lifetime she loved being hired as one of the original female Police officers in Scottsboro. She didn't carry weapons or ride in patrol cars, but she directed traffic at major school intersections during the morning and then again in the afternoons when school was dismissed! She did this as a second job, just because she liked it! She had to be trained, of course, and she later trained others who were hired within the force. The date on the front of her license shown in the photo is an updated one. She was actually hired in August of 1967. There was always a “story” about her day at work! One of my favorites has to be her story of the diesel trucks. She was working the intersection at the main entrance of what was the Scottsboro High School which is now Collins. This would have had to be after 1968 because I was in the 2nd graduating class of the new school in 1969. She was standing in the middle of the highway with no space to “run” and two diesel trucks going in opposite directions came within inches of her in passing. She said she just stood there in the whipping wind and prayed that she wouldn’t get sucked up under one or both of the trucks! She, of course, was shaken, but when she told the story she just shook her head and laughed! We all thought that would end her love of that job, but it didn’t . She stayed and actually trained other women to follow. If anything she was truly a hard-working woman! My Mother was a character for sure!
http://www.MemoryPrintsPhotography.com
http://www.YouTube.com/dodotburgess
Posted by Deborah L. Johnson Burgess at 7:40 PM No comments: 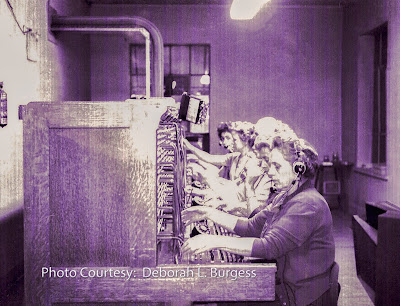 I remember my mother talking about walking that flight of stairs every night on her way to work.  She, my mother Joycelyn Dean Johnson, worked for several years as a switchboard operator for the phone company. She, as an operator, would actually connect each and every phone call that was made in the area using phone jacks and a rotary dial station which was located at each operators “desk”.  When someone wanted to make a call, they picked up their phone and one of the operators would pick up and ask, “Number Please?” and then the operator would direct your call into the “wall” of connections that faced their desks.  If someone wanted to call “long distance” they would also direct the calls from the same station, only in a different manner.  I remember stories that were told about how all this took place. I remember the number that I called to reach my Grandmother Johnson at the old Johnson Plumbing and Electrical company.  When the operator asked “Number please, I responded 244-0”. 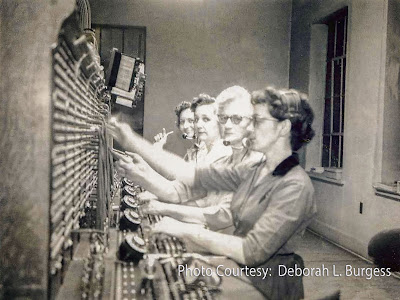 The "live" switchboard operators in their work stations.
My Grandmother would answer at the same time my Grandfather answered at the plumbing office.  I would state who I wanted to talk to and the other one would hang up!  This procedure was considered a “party line” connection.  This same procedure was also offered in neighborhoods where for a discount on your monthly bill, you were offered a “party line”.  When you picked up and someone was on the phone, you would merely excuse yourself and try your call later when they were finished with their call.  This process worked for the best most of the time, but there was always a “customer” that would abuse the system and use more time than their rightful share and would unfairly use more than their share of time.   All this sounds so complicated but it seemed to work fine at the time!  I do remember hearing folks talking about how the “new system that was coming” would not work as well and would not be “well received” as the old live operator, “number please” system that was in place. 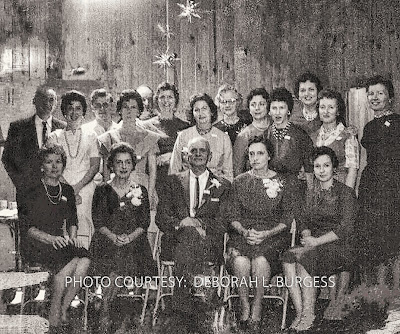 Photo was taken at a Christmas Party inside the facility.

Look at how far technology has come since then!     I do regret not taking more notes and paying more attention on this procedure  because there is so much information that I don’t remember in detail.  This phone system preceded the actual home rotary system.  When the “live operator” system was in existence the operators dealt with legitimate phone calls and a “mix” of many other prank type calls which included calls made by folks that may have had a few too many to drink and used the convenient live operator system as a “whipping post” for whatever reason.  After the new phone system was installed, my mother and the other operators, of course, lost their jobs.  Each of the operators were given a gift of a personalized key ring ornament that was an exact replica of the plugs that were used in the phone operation, a beautiful silver pin which was engraved with the new rotary phone,  and the actual headsets that they wore while taking all those calls.  My mother kept her headset for many years but unfortunately they were lost or destroyed in a home fire years later.  I still have the key ring replica and the lapel pin, (please see photo) and many memories of stories that she told about the old phone company.  My mother always worked the night shift but the company, being in operation 24/7, offered many shifts for the different operators.  Years later after the “live operator” Bell phone company closed, the “row” of businesses and offices on that block were burned in a fire.  I remember the florist, and two beauty shops and a couple of office buildings being completely destroyed.  I am unsure of the date of the fire.  No structures were ever built in replacement after the fire.  Today it is used as parking for the surrounding businesses including the Scottsboro Post Office.

Posted by Deborah L. Johnson Burgess at 4:09 PM No comments: